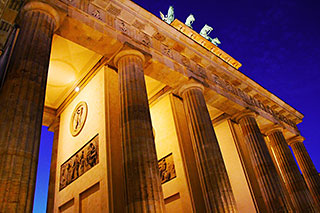 Brandenburger Tor
Nothing says "Berlin" quite like the Brandenburg Gate (Brandenburger Tor), the city's most defining. Built for King Frederick Wilhelm II in 1791, this 26-meter-high sandstone monument in the Mitte district's Pariser Platz was Berlin's first Neoclassical structure, notable for its four-horse chariot, its six large columns on each side forming five passages for use by traffic (the center one reserved for royalty), and the two buildings used by toll-collectors and guards. Brandenburg Gate continues to be of symbolic importance and has seen many famous visitors. 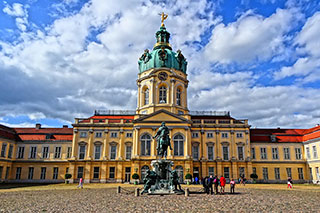 Charlottenburg Palace
(The Conference's Monday Evening Reception will be held in its Orangery)
Berlin's oldest and largest Prussian estate, the late 17th-century Charlottenburg Palace was for decades the most important place of residence for Prussian Kings and Electors. Beautifully restored, this huge palace hosts many important features, from its massive 50-meter-high central dome to the exquisite Orangery added in 1712. A highlight of the property's tour is a visit to the New Wing with its state apartments and fine banqueting halls. The Old Palace features the Porcelain Cabinet, home to one of Germany's most important porcelain collections, along with displays of valuable items including the Crown Jewels. 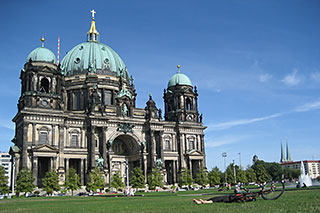 Berlin Cathedral Church
Famous for its 75-meter-high dome with its old bell from 1532, Berlin Cathedral Church was completed in 1905 on the site of an earlier cathedral dating from the time of Frederick the Great. Built in the New Baroque style, the building -- the largest church in Berlin -- is divided into three main sections: the Memorial Church, the Baptismal and Nuptial Church, and the Parish Church. After decades of work to repair war damage, the church has been returned to its former glory, and highlights of a visit include the Imperial Staircase, decorated with bronze cornices and 13 tempera paintings by Berlin landscape painter Albert Hertel in 1905, and the Imperial Gallery with its views of the area below the dome. 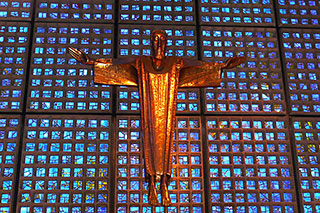 Kaiser Wilhelm Memorial Church
One of Berlin's most interesting landmarks, Kaiser Wilhelm Memorial Church (Kaiser-Wilhelm-Gedächtniskirche) is in many ways two churches: the modern new church designed in 1961, and next to it, the ruins of the original, including most of the 63-meter-high tower. Completed in 1895 in honor of Emperor Wilhelm I, the original was destroyed in 1943, but its remains were incorporated into the new complex. The result is now a major Berlin landmark that also serves as a war memorial, with a memorial hall installed containing mosaic remains, architectural remnants, and photos. The centerpiece is a figure of Christ from the old church and a Cross of Nails from Coventry Cathedral, destroyed by German bombs earlier in WWII. Guided tours are available, and visitors are welcome to participate in Sunday services; Evening Music Services featuring cantatas, organ recitals, and choral music; and regular weekday services. 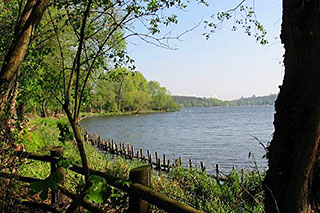 Grunewald Forest
Berlin has managed to retain an area of some 32 square kilometers as forest known as the Grunewald (Greenwood). This heavily treed area takes its name from the Hunting Lodge built in 1542 by Elector Joachim II. It's a lovely natural area of mixed oak, beech, pine, birch, acacia, and poplar trees, and provides shelter for an abundance of wildlife including birds, deer, and even wild pigs. Highlights include its three little lakes -- the Pechsee, Barssee, and Teufelssee -- which form part of a popular nature reserve, while in the eastern section are the larger lakes: Hundekehlesee, Grunewaldsee, Schlachtensee, and Krumme Lanke. Together with a nine-kilometer stretch of riverbank along the Havel, the lakes offer numerous opportunities for watersports and bathing. 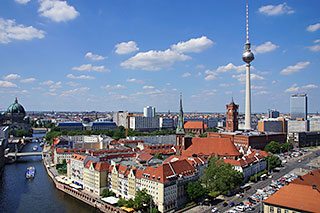 The Nikolai Quarter
Berlin's Nikolai Quarter (Nikolaiviertel) is considered the heart of the old city, and is where you'll find many of its oldest and most popular attractions, including St. Nicholas' Church (Nikolaikirche), a number of museums, and a fun history trail. Recent redevelopment has seen this pedestrian friendly quarter become home to many small buildings set along narrow streets full of nooks and crannies and home to restaurants, cafés, shops, and craft workshops selling everything from basketry to wooden crafts. Highlights include the district's many old fountains, lanterns, and lattice-windows on the older houses, and historic buildings such as Ephraim Palace, built in the 1760s and housing exhibits relating to Berlin's rich artistic and cultural history (be sure to visit its exquisite grand staircase). Also of note is Knoblauch House, built in 1760 and representative of the former homes of the city's wealthy Jewish merchants and tradesmen. 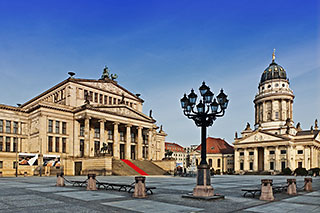 The Gendarmenmarkt
The Gendarmenmarkt, one of Berlin's largest squares, is dominated by three large historic buildings - the Konzerthaus, the French Cathedral (Französischer Dom), and the Berlin Cathedral (Berliner Dom) - that together form one of the most picturesque corners of the city. Laid out in the 17th century and named after a regiment of Gendarmerie that had a guardhouse here, it remains one of the city's most popular places, day and night. The Konzerthaus, built in 1821 on the site of an earlier theater, has long been one of Berlin's most important and is as famous for its architectural splendor as it is for the first-rate performances of Konzerthausorchester Berlin, one of the country's most popular symphony orchestras. 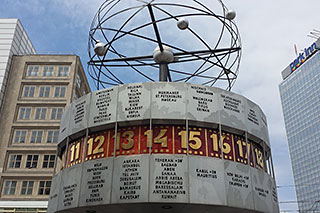 Alexanderplatz
Another well-known square in Berlin, Alexanderplatz (popularly known as "Alex") was the very center of East Berlin life and is now home to the World Time Clock, a popular meeting place. Nearby is the Television Tower (nicknamed "Telespargel") with panoramic views of the city. 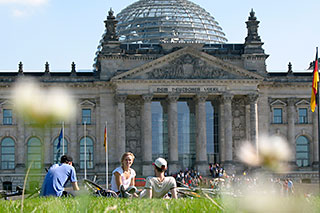 Reichstag
The seat of the German Parliament is also one of Berlin's most famed landmarks. From burning down in 1933 to being abandoned, then wrapped in a million square feet of fireproof polypropylene fabric by artists Christo and Jeanne-Claude, and finally being capped with a fancy transparent dome designed by Sir Norman Foster, the building has enjoyed its fair share of ups and downs. Guided tours (lasting 90 minutes) are available when Parliament is not sitting (advance reservation only) and other guided tours are offered. 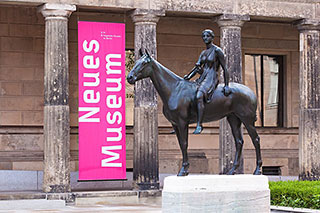 Museum Island
Between the River Spree and the Kupfergraben, a 400-meter-long canal, Museum Island (Museumsinsel) is a wonderful part of old Berlin to explore. Here you'll find many of the city's oldest and most important museums, including the Old Museum (Altes Museum), built in 1830 to house the Crown Jewels and other royal treasures. Further development saw the construction of the New Museum (Neues Museum) in 1855, followed by the National Gallery in 1876, and the Bode Museum in 1904, home to one of the city's finest collections of antiquities. If you're only able to see one or two museums due to time restrictions, make sure one of them is the Pergamon with its spectacular reconstructed historic buildings from the Middle East. 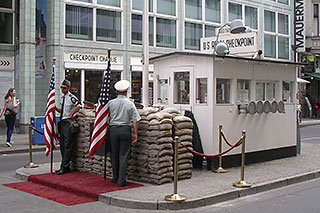 Checkpoint Charlie and The Mauer Museum
Checkpoint Charlie was the main entry point for visitors wanting to cross the infamous Iron Curtain to East Berlin during the division of the city. It was also the spot where, in 1961, US and Russian tanks literally lined up to face each other in what the world believed could be the start of another war. Built with its original "look" in mind, the attraction comes with border guards outside and a museum featuring tales of escapees (would-be and successful) plus a range of memorabilia and interesting exhibits. 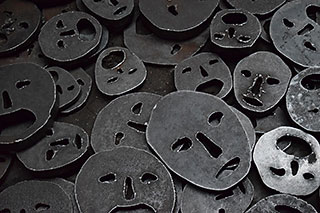 Jewish (Jüdisches) Museum
Daniel Libeskind's Jewish Museum is a must-see in Berlin, both historically and architecturally. The zig-zag zinc-clad building has been thoughtfully designed and its contents cover more than 2,000 years of Jewish history (from the Roman era to the present day), arranged in 14 different rooms and areas. The building also has five vertical voids, walls of dark concrete, a spectacular glass courtyard and an equally angular new archive was added in 2012. Guided tours are available and the kosher café-restaurant is very good. 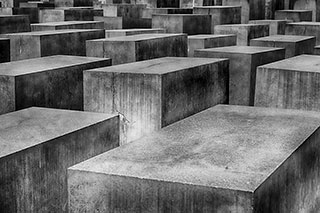 Memorial to the Murdered Jews of Europe
The Memorial, designed by Peter Eisenman, is made up 2,700 concrete slabs arranged in a neat grid spread across 200,000 square feet near the Brandenburger Tor. They're deliberately built at varying height to give visitors a sense of disorientation and confusion. The Memorial To The Murdered Jews Of Europe includes an information center located underground as well as an exhibition on the eastern side of the memorial. Part of the exhibition is a data center that holds the names of all the Jews that were killed during the Holocaust. The underground museum aims to explain the process of persecution of the Jewish population in Germany before and during the war. As part of that, it showcases the sites where some of the most terrible human crimes took place. 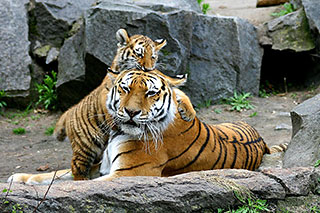 Berlin Zoo
Germany's oldest zoo (1844) occupies a generous corner of the Tiergarten park. It is home to more than 15,000 animals, giant pandas included - many (but not all) in large, open natural areas. The zoo also features Europe's most modern birdhouse, with more than 550 species, and the adjacent aquarium (added in 1913, separate charge) has 9,000 species of fish, amphibians, creepy crawlies and other fascinating creatures. 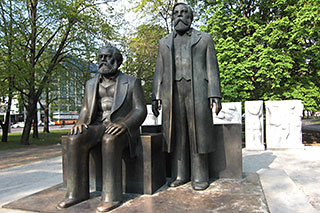 Talking Statues
Although statues are important sights on the streets of most cities, foreign travellers often miss out on the significance of the people or events commemorated in bronze and stone. A new project in Berlin lets selected statues in the city center speak: after scanning a QR code on your smartphone, you're called by the statue.

English-speaking actors tell fascinating stories about the statues and the artists who made them: like August Gaul's lion on Museumsinsel, Karl Marx and Friedrich Engels on Alexanderplatz, nuclear physicist Lise Meisner (the first female scientist in Germany commemorated with a statue, in 2014), and others. For more information and a downloadable map see www.talking-statues-berlin.de.