Venue » Beyond Berlin
Berlin is a great jumping off point for visiting many of the beautiful sights in North Eastern Germany. Day trip options include seaside resorts, castles, historical locations and famous cities with beautiful architecture. 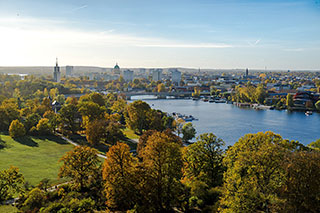 Potsdam
Potsdam is a 25-minute train ride from Berlin, so it's very easy to explore this wonderful city. It is full of charming, narrow streets with small boutiques and delicious cafés and restaurants; the Dutch district in particular is worth an extensive stroll. Go visit the old town hall, the old market, Potsdam's own Brandenburger Tor and, the Sanssouci Palace and Park. 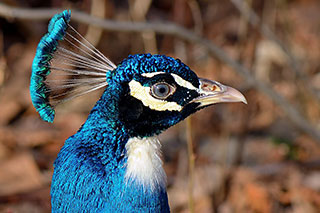 Pfaueninsel
One of the most romantic getaways around Berlin is probably Pfaueninsel (Peacock Island) and it's just an hour outside of the city. The island is a UNESCO World Heritage site and every Berlin tourist should visit at least once. No cars are allowed apart from those belonging to the inhabitants of the island, and you can only get there by ferry. The old castle and its gardens are inviting for a picnic, and it's the perfect place for a special occasion. 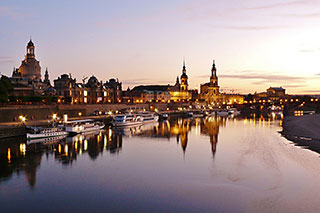 Dresden
On the banks of the lovely Elbe River and roughly two hours by train from Berlin, Dresden is lush and green, filled with forests and gardens and parks. The city is rich with cultural and artistic history; the great operatic composer Richard Wagner debuted a number of works here in the 1800s and, today, an independent light opera company keeps the classical art form modern and fresh. Art enthusiasts will love the Gemäldegalerie Alte Meister and Grünes Gewölbe museums, and architecture buffs will delight in the mélange of styles reflected in the cityscape. 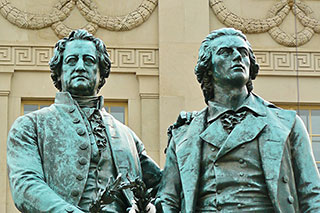 Weimar
Weimar, just 2.5 hours by train from Berlin, was quite the intellectual hotspot back in the day, with Goethe, Friedrich Schiller, Bach, Liszt, Lucas Cranach and the Weimar School all spending time here. Goethe lovers will enjoy visiting his home, his tomb and the museum dedicated to him. Weimar was the cradle of the Bauhaus movement, which created a revolution in art, design, and architecture. Around town you'll see more than 10 historic buildings from the Classical Weimar period (1775-1832), which are UNESCO World Heritage sites. Along the way are magnificent town houses, the royal stables, the neo-Gothic Town Hall, the Baroque Duke Palaces, and many more historically important architectural gems. 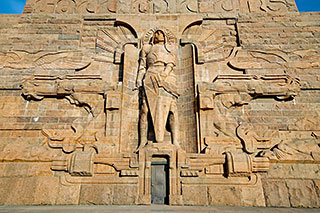 Leipzig
Leipzig is a city of enormous history, a trade-fair mecca, and solidly in the sights of music lovers due to its connection to the lives and work of Bach, Mendelssohn and Wagner. A little over an hour by train from Berlin, you can find one of the world's top classical bands, and oldest and finest boys' choirs (the 800-year-old Thomanerchor) in Leipzig. When it comes to art, the neo-realistic New Leipzig School has stirred up the international art world with such protagonists as Neo Rauch and Tilo Baumgärtel for well over 10 years. Leipzig became known as the City of Heroes for its leading role in the 1989 "Peaceful Revolution," when its residents organized protests against the communist regime in May of that year; by October, hundreds of thousands were taking to the streets and a few years later, the Cold War was history. 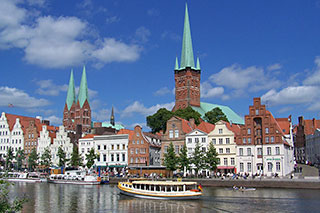 Lübeck
Lübeck, the Queen of all the Hanseatic cities, was founded in 1143 as "the first western city on the Baltic coast." Today, its appearance is still characterized by a medieval ambience and by cultural and historical attractions, such as the Holsten Gate, that go back to Lübeck's glorious past as a free imperial and Hanseatic city. Surrounded by water, the old town with its seven towers and five principal churches brings to life 1,000 years of history. The Gothic, Renaissance, baroque and neo-classical buildings, narrow lanes and streets, churches and abbeys, merchants' houses and fortifications come together to form a remarkable whole. A jewel of brick-Gothic architecture, the Church of St. Mary is a model for around 70 other churches around the Baltic, and of great architectural merit thanks to the highest brick-vaulted roof in the world. 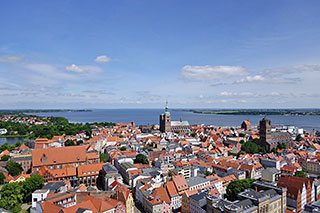 Stralsund
Stralsund was once the second-most important member of the Hanseatic League, after Lübeck, and its square gables interspersed with Gothic turrets, ornate portals and vaulted arches make it one of the leading examples of Backsteingotik (classic red-brick Gothic gabled architecture) in northern Germany. This vibrant city's historic cobbled streets and many attractions make it an unmissable stop in the region. The Old Market with its gothic town hall is at the center of the city and is a good place to start exploring. Outdoor restaurants and cafes fill the square during the warmer months. Saint James's Church and Saint Mary's Church are highlights of the architecture of the Hanseatic period. The construction of these buildings is unique and is done with fired bricks, named "Gothic bricks." 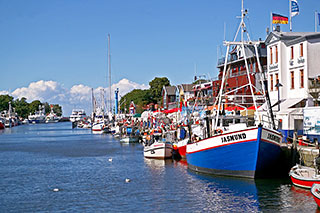 Rostock
Eight hundred years of history have shaped this "Gateway to the North" city. Rostock has preserved much of the charm that it once possessed as one of the most important members of the Hanseatic League. The gabled houses dominating the skyline attest to this, as well as the imposing brick warehouses, massive gates and fortifications, and awe-inspiring churches. Important examples of medieval and Renaissance architecture abound in Rostock's Old Town. 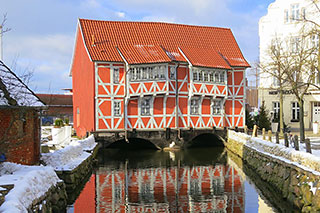 Wismar
Over in Wismar, the Market Place is also a good place to begin a tour of the city. It is one of the largest market places in northern Germany and is lined by buildings showing a progression in styles over 500 years. Saint Mary's Church was heavily damaged during the Second World War and only an 80-meter tower remains. However, the nearby St Nicholas's Church gives a good impression of the high vaulting style of the time. You can also get an elevator up to the top for great views across the whole city.